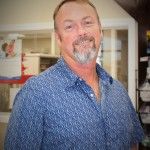 Patrick became a Naval Hospital Corpsman out of high school for 4 years working closely with the United States Marines. After the Navy, Patrick became a licensed builder in WNC, and has been for the past 20 years. During that time, Patrick coached basketball and soccer in Fairview community. Patrick is a proud father of 3 rocket graduates and in 2008 he began a partnership with his wife when they opened a local long-term care pharmacy in Fairview, NC. Patrick completed the Pharmacy Technician National Certification in 2010 and in 2012 he got his Drug Compounding Certification. In 2012, Patrick completed construction on Americare’s new retail and long-term care pharmacy location. Patrick enjoys going scuba diving and is a fervent hunter and fisherman in his free time. Patrick and Sandi’s children are all employed with various positions at the new pharmacy which makes this truly a family owned and operated business.